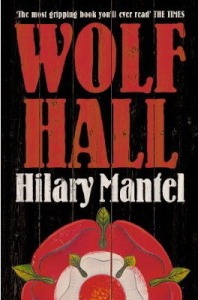 When I cracked open Wolf Hall, I was curious about what would make a contemporary work of historical fiction worthy of the Man Booker prize. The point of view is close third, and the story is told in the present tense, which strikes me as unusual in historical fiction, and goes some way toward explaining this Tudor narrative’s distinctly contemporary feel. Mantel may be overly rigorous in sticking to the intimate POV of Wolf Hall’s protagonist: there are a great number of unattributed pronouns that a reader must occasionally struggle to assign. (Usually “he” refers to Mantel’s protagonist, Thomas Cromwell, but, obviously, not always.)

The novel has a unique narrative voice that’s harder to define – a voice that at first seems unnecessarily opaque, but gradually gains both clarity and power, and evolves into something altogether more sure-footed and engrossing. The complexity of the novel’s subject matter and the vast amount of history left unstated leaves the reader feeling virtuous, as if he has been called upon to participate alongside the author and characters in wrestling with events of tremendous human import.  And once the story itself gains momentum – watch out. Wolf Hall is a literary page-turner of the first rank.
What makes it so good? In my opinion, it’s not so much the style or the subject matter as it is Mantel’s supreme gift for portraying character. Witness the following passages:

Everything Chapuys does, he notices, is like something an actor does. When he thinks, he casts his eyes down, places two fingers to his forehead. When he sorrows, he sighs. When he is perplexed, he wags his chin, he half-smiles. He is like a man who has wandered inadvertently into a play, who has found it to be a comedy, and decided to stay and see it through.

Gardiner laughs: his deep bass chuckle, like laughter through a crack in the earth.

I don’t know about you, but I find this kind of thing downright awe-inspiring, like fictional versions of portraits by Henry VIII’s court painter, Hans Holbein.

Even more striking than Mantel’s vividly drawn miniatures, however, is her main portrait, her masterpiece: Thomas Cromwell. Cromwell is a notorious figure in history, the willing henchman for a bloody-handed king, but Mantel quickly has us sympathizing with him. He seems basically decent: he is loyal and loves his friends; he is stylish and clever; he is vengeful, but in a way that is, if not justified, at least fully comprehensible. He keeps the sort of pieced-together family that we immediately recognize, a laughing, good-natured household of which Cromwell is the loving and beloved patriarch.

Cromwell is a working class underdog, using his wits to prevail among the titled idiots of Henry VIII’s court. Mostly, we appreciate his resourcefulness, his bold machinations. We love Cromwell because he is so fun to watch. He shows us something we deeply want to see about the human capacity for genius.

At the same time, a large part of Cromwell’s appeal is his limited power. He operates within an extremely restricted ambit. He must please the King, and he must accomplish everything he does despite his status as a lowly commoner among aristocrats. The fact that he’s able to achieve so much fills us with admiration. We admire the cagy wisdom that allows him to navigate a Tudor snake pit where one is on top of the world one day and kneeling before a chopping block the next:

It is no good to explain. It is weak to be anecdotal. It is wise to conceal the past even if there is nothing to conceal. A man’s power is in the half-light, in the half-seen movements of his hand and the unguessed-at expression of his face. It is the absence of facts that frightens people: the gap you open, into which they pour their fears, fantasies, desires.

Cromwell’s positioning in this distant outpost in history feels familiar to us because of the restrictions we all face in our own lives, from the President on down to your average Burger King hamburger flipper: our limited power to achieve our goals given what we’re up against. For this reason, unlike many characters in speculative and historical fiction, Mantel’s Thomas Cromwell will continue to resonate in the hearts of twenty-first century readers. In a very real way, his story is our own.

Do you enjoy this kind of literary craft analysis? Read more here.