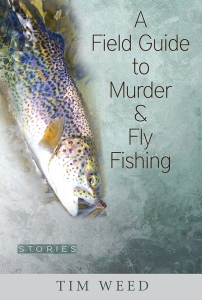 “These are stories that will live a long time both on the page and in your heart.” —Joseph Monninger, author of The World as We Know It.

“Tim Weed proves himself a skilled creator of a sense of place . . . each story deposits one definitively into a geography, of mind and map.” — The Boston Globe

“This collection of stories by Tim Weed is grounded in the specificity of its settings, all of which contain hazards of one kind or another: a mountain lake, a jungle peak, an Amazonian river, a prairie giving way to construction, a seashore suddenly overcome by the tide, a city stuck in the past, a snowy slope (or two). But it is also full of mystery, and much of the mystery is cosmic. Its stories are about transgression and karma, and a natural order that seems to render its characters uncertain of their own reality. It is written so deftly, with such a light touch, that suspense builds in each story like a gathering storm.” — Patrick Joyce, Midwest Book Review

“These stories bristle with energy and immediacy. The writing is spare and meticulous and packs a hefty emotional punch. I am not exaggerating when I say this collection kept me up at nights. I just couldn’t stop reading.” — Jenny Lyons, Addison Independent

A Field Guide to Murder & Fly Fishing made the 2018 Eric Hoffer Book Awards Short List and was a finalist in the short story category for both the 2018 American Fiction Awards and the 2017 International Book Awards. “The Afternoon Client” won the Writer’s Digest Popular Fiction Awards, and “Tower Eight” was the Grand Prize winner for Outrider Press’s The Mountain anthology. Previous versions of the collection were shortlisted for the New Rivers Press Many Voices Project, the Autumn House Press Fiction Prize, and the Lewis-Clark Press Discovery Award.

“[In “Tower Eight”] Weed delves into adolescent friendship and the idea of being an outsider with great care for his characters. The tale begins and ends with one character musing on the reality of the other. The surreal ploy is subtle enough to bring the story into the realm of good literature, making the reader question perceptions of reality . . . Weed’s prose is weightless, and weighty, all at once.” — Sadie Williams, Seven Days

“From the mountain lakes of the Colorado Rockies to cobbled streets of Spain, this fascinating collection of short stories by Vermont-based writer Tim Weed (Will Poole’s Island) never disappoints.. . . A Field Guide to Murder and Fly Fishing is a collection you’ll be happy to get lost in.” — Ploughshares.

Individual stories in the collection have been nominated for the Pushcart and Best of the Net anthologies and shortlisted for the Tucson Festival of Books Literary Awards, the Lightship International Literature Prize, the Glimmer Train Short Story Award for New Writers, the Rick DeMarinis Short Fiction Award, the Alligator Juniper Award for Short Fiction, the Richard Yates Short Story Awards, and others.

“If you seek a guide—on coming of age, lost love, temptations both resisted and surrendered to, and the need to both engage with and respect the planet—Weed’s book is a good choice. It won’t tell you which laws to obey and which to break—but it will show you, with simultaneous beauty and savagery, what will happen either way.” — Mary Medlin, Colorado Review

“But if we malign Hemingway and his progeny—a bloodline to which A Field Guide to Murder and Fly Fishing could be said to belong—it’s because the archetypes of power from his day have remained in power all along. Tim Weed is a writer who knows how to interrogate those archetypes, smash them open, see what they bleed—and, if necessary, take them fishing.” — Matthew Sirois, Necessary Fiction

“Diamondback Mountain.” A young ski instructor at a remote hotel in 1930s Colorado falls in love with a rising Italian movie star, but fate conspires to keep the couple apart. CRAFT.

“Gunnison Gorge.” A lonely traveler gives a ride to a mysterious couple on his way to a remote fly fishing river in a wilderness area of central Colorado, worries that the woman may be in some kind of trouble, and believes himself well-positioned to do something about it. Manifest West: Transitions and Transformations. Western Press Books.

“The Knife.” A young man from the city moves to rural Vermont to work for an unorthodox businessman who teaches him to hunt, with troubling results. Blueline.

“The Dragon of Conchagua.” A troubled former Peace Corps volunteer returns to Ecuador to climb a high-altitude volcano, where he is haunted by increasingly vivid memories. Saranac Review. Earlier version shortlisted for the Tucson Festival of Books Literary Awards.

“Landfall” (novel excerpt). Will, Squamiset, and Natoncks undertake a perilous open-ocean journey off the coast of mid-seventeenth century New England. The Island Review. Click here to purchase the novel, Will Poole’s Island.

“Mouth of the Tropics.” The Hopper (Green Writers Press). An American biologist in Venezuela’s Orinoco Basin sets out to discover a new amphibian species, and gets a great deal more than he bargained for in the process. An earlier version appeared as “Specimen” in Victory Park: The Journal of the New Hampshire Institute of Art, and was nominated for the Pushcart Prize Anthology.

“A Winter Break in Rome.” A college student infatuated with a beautiful girl is surprised by violence in an ancient European city. The Flexible Persona.

“The Money Pill.” An American tour guide living in Cuba discovers hidden powers and comes to understand the costs of putting them to use. Everywhere Stories: Short Fiction from a Small Planet (anthology). Press 53. Originally published in Lightship Anthology 2, Alma Books, and shortlisted for the Lightship International Literature Prize in Short Fiction.

“Tower Eight.” Two teenage misfits who do LSD and put themselves into various dangerous situations in rural New Hampshire, establishing a tight friendship as they hurtle toward a tragic end. Grand Prize Winner, The Mountain (anthology). Outrider Press. Originally published in Gulf Coast.

“Steal Your Face.” A young man loses the love of his life and is captivated by dangerously alluring visions. Experienced: Rock Music Tales of Fact and Fiction (anthology). Vagabondage Press. The Storyteller Speaks: Rare and Different Fictions of the Grateful Dead (anthology).  Kearney Street Books.

“Keepers.”  An amateur sportsman leaves his young family behind to go fly-fishing at the edge of the ocean and has occasion to regret it. Boston Fiction Annual Review.

“Scrimshaw.” A construction worker becomes a caretaker for rich people’s homes on an Atlantic island resort, and temptation gets the better of him. The Gihon River Review.

“The Virgin of Quito.” A traveler in Ecuador makes a gambit that he later comes to regret. Chiron Review.

“Snarl.” A pair of scavengers escape from a Buenos Aires zoo too taste the air of freedom. LITnIMAGE. Nominated for Sundress Publications’ Best of the Net anthology.

Consider adding the complete collection of A FIELD GUIDE TO MURDER AND FLY FISHING to your library.

“Each story is a jewel, cracking open what matters most: love, family, and our big beautiful planet.” —Ann Hood, author of The Book That Matters Most

Put it on your Goodreads “Want to Read” list here.