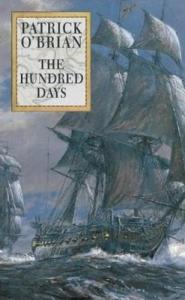 Patrick O’Brian’s sentences have an internal momentum that propels the reader forward. The artful deployment of concrete, specific, detail – the lifeblood of absorbing fiction – endows his prose with an opalescent shimmer:

They drew in with the land – a fine topgallant breeze on the larboard quarter – and presently the sea grew more and more populated with feluccas, trabaccaloes, merchantmen of various rigs and sizes making for Bocche di Cattaro or emerging from the splendid great harbor, and with fishermen, some in fast xebecs with twenty-foot-long trolling rods out on either side, like the antennae of some enormous insect.

Buoyed by such lucid passages, O’Brian’s narration exudes an authority that carries the reader along over potential bumps in the fictional road, such as the thin suspense and fizzling subplots in the nineteenth volume of his masterful sea novels of the Napoleonic era, The Hundred Days. The trust implicit in the relationship between the author and the reader also allows for some nifty special effects. I am especially taken with his ability to move his characters through time and space, which is what I want to focus on in this post.

‘He was indeed a most amiable young man,’ said Stephen. ‘But I believe that the great house with two sentinels before it is where Don José lives.’
It was, and Don José was at home. He received them very kindly: Stephen and he went through the graceful Spanish ceremony of compliments presented and returned, Jack bowing from time to time, and Don José accompanied them to the outer door itself.

By this time it was dark and the steady horses made their way through fireworks, cheering crowds, bonfires with children leaping over them, and great numbers of muskets being fired into the air, the smoke alas still racing northward, perhaps even faster than before.
‘Lord,’ said Stephen, as he and Jacob, having changed into more everyday clothes, walked downstairs to dinner at the consulate . . .

O’Brian is a master of narrative summary. The above passages use hints of suggestive description—“the graceful Spanish ceremony of compliments presented and returned;” “bonfires with children leaping over them”—to create convincing scenic tableaus as the narrative speeds along to the next scene. This works well for O’Brian because 1) the authority emanating from his lovely prose lulls the reader into trusting where he’s being taken, and 2) over the course of his novels O’Brian has taught the reader how to read O’Brian. In other words, the reader knows that on a practical basis a great deal of time must pass between adventures aboard an 18th century sailing ship. One has grown to expect rapid summaries that accelerate from one scene to the next.

Even more interesting to observe are shifts that take place suddenly, mid-scene. For example:

‘All these things shall be done,’ said Ahmed. ‘I shall rouse some servants. But when you have taken your bath I am afraid you will have to lie down in my room again.’
Down, down, down into a blessed sleep: Stephen, washed clean of sand, even his hair, fed, watered, wrapped in clean linen. Sank to those perfect depths where even the varying howl of the sirocco could not disturb him.

The above passage achieves compression by delaying the stage directions (“washed clean of sand,” etc.), to a brief summary at the end of the sentence. The main physical “business” of the scene comes almost as an afterthought – though at least an hour or so must have passed between the servant’s statement and sleep.

Conversation at table soon rose to a fine volume . . . and from that moment on, except when good manners said they should say something to their other neighbors or drink a glass of wine with an old acquaintance on the other side of the table . . . where no unguarded word could do harm.
‘God love us,’ said Joe Plaice, taking his ease on the quarter-deck, a little abaft the wheel, ‘what a din they do make, to be sure. You would think it was the snuggery of the William at Shelmerston of a Saturday night.’
‘Never mind mate,’ said his cousin Bonden, ‘ . . . once they have drunk the King, they will be quieter. They have eaten two whole sucking pigs, which weigh on the stomach.’
There was indeed a pause after all present had murmued ‘God bless him’ and drunk their wine . . .

Note that in this brief passage, without any breaks, we’ve been whisked out of a VIP dinner gathering in the captain’s cabin to the quarterdeck—where we eavesdrop on a brief exchange between seamen—and then back to the festive table. All without needing to set up a new scene. That’s good writing, and economical too.

‘Yes,’ said the Admiral. ‘I have heard something of it; and I congratulate you on your success, I am sure . . . (‘How he banged them about!’ murmured Sir James.) Have you prepared a report?’
‘Not yet, my Lord.’

Sir James’ comment is not addressed to either speaker, although he is seated at the same table. But instead of labeling it as a murmured aside with its own paragraph breaks, O’Brian simply inserts it in the middle of the Admiral’s line, approximating the effect of simultaneous dialog. Pretty neat.

Whatever one thinks of his Napoleonic-era fiction, there can be little doubt that Patrick O’Brian was a writer of great virtuosity. He had the benefit of a loyal and sympathetic readership, together with an imagined setting he’d come to know in living detail. O’Brian has much to teach us about the freedom a writer has to take risks once a certain level of confidence has been established with his readers, and the creative liberties that are available to us for compressing and expanding the time and space traversed by a narrative.