What an honor to be included among the stellar group of authors participating in this year’s Brattleboro Literary Festival (October 2- 5, 2014) which for thirteen years has been one of the most dynamic and well attended celebrations of books and readers in New England. And what a blast to hang out with old friends, meet new ones, hear talented and interesting people discuss their work and read from it, all the events well attended, and the streets of good old Brattleboro teeming with readers and writers of every stripe. Thanks to the organizers and volunteers, my friends and fellow writers, and everyone who came out to celebrate the power and beauty of the written word!

What a pleasure and an honor to read and discuss books alongside the talented Don Bredes, a fellow Vermont writer 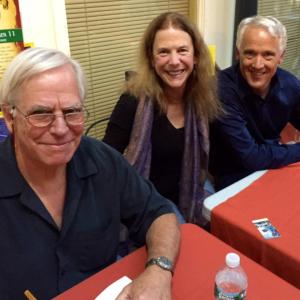 Giving a little pre-reading context for Will Poole’s Island

So great to see the streets and venues of Brattleboro filled with writers and readers. Reports of the death of the book have been very much exaggerated!

You are currently reading Brattleboro Literary Festival at Tim Weed.